At 11:15 Beijing Time (GMT+8) on August 19, 2014, BRITE-PL"Heweliusz" Satellite of Poland was successfully launched as piggyback payload aboard the LM-4B Launch Vehicle for GF-2 Satellite in Taiyuan Satellite Launch Center. This launch is the 37th flight of LM-4 series launchers. It also marks the 191th launch of Long March fleet.

On August 12, 2013, China Great Wall Industry Corporation (CGWIC), subsidiary of China Aerospace Science and Technology Corporation (CASC) and Space Research Center of the Polish Academy of Sciences (SRC PAS) signed the Launch Services Agreement for the piggyback launch for BRITE-PL- "Heweliusz", which was developed and built by SRC PAS and is designed for scientific purposes.

BRITE-PL-"Heweliusz" is one of the six BRITE series spacecraft to be deployed in a constellation, which is developed with cooperation by Canada, Austria and Poland.

This piggyback launch is the collaboration between China and Poland in the space field for the first time. The LM-4B Launch Vehicle for this flight is designed & manufactured by Shanghai Academy of Space Technology (SAST), which is also a subsidiary of CASC. It is mainly for the Sun Synchronous Orbit mission.

The main passenger of this mission is GF-2 satellite, which is designed and manufactured by China Academy of Space Technology (CAST), subsidiary of CASC, for land resources survey. 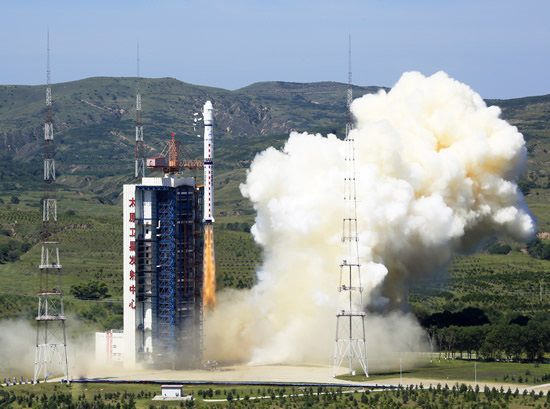